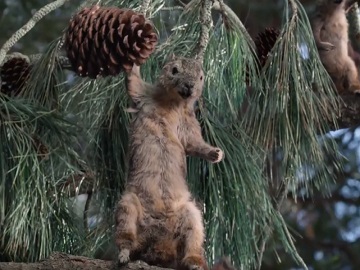 Farmers Insurance continues its Hall of Claims ad campaign with a new spot, featuring a bunch of “vengeful vermins”.

The 15-second commercial illustrates the case of a man who, on August 5, 2016, saw his car “attacked” by several squirrels that were throwing pine cones at it while he was trying to cut off a tree in the woods. Seeing them in action, he bolted, afraid that he might become a target too.

“Vengeful vermin. Seen it. Covered it. We know a thing or two because we’ve seen a thing or two.” – Professor Burke (played by Oscar winner JK Simmons) tells a woman who’s looking at the statue of a squirrel in the Hall of Fame.

This is not the first claim involving a car attacked by animals that was covered by Farmers, though. In 2011, a customer’s shiny new car was attacked by a group of goats upon seeing their reflections. Many other bizarre insurance claims are available to browse through on the interactive website called “Hall of Claims”, created based on real insurance claims compiled by Farmers’ network of agents and its claims professionals.