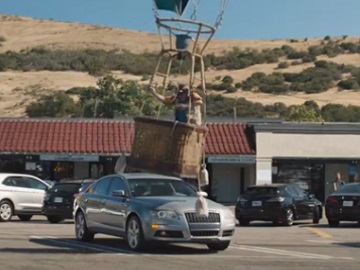 The 15-second spot, titled “Fly-By Ballooning,” recreates a situation that took place on October 27, 2017, when a man in a hot air balloon lost control of the transportation means, damaged a car parked near a grocery store and then flew on his way, not before leaving, though, his phone number on a piece of paper to the car owner and asking him to call him.

The commercial ends with Prof. Burke – played by Academy Award-winning actor J.K Simmons – telling a customer, while looking at a small version of a hot air balloon, in the Hall of Claims, “A Fly-By Ballooning. Seen it, covered it. We know a thing or two because we’ve seen a thing or two”.