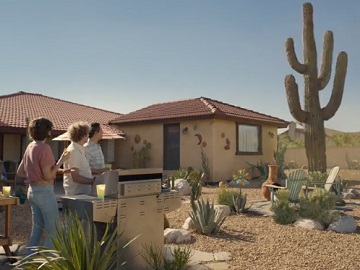 The 30-second spot, titled “Cactus Calamity”, opens, as all the others, with Prof. Burke – played by Academy Award-winning actor J.K Simmons – walking through the Hall of Claims together with a customer, telling him “At Farmers, we’ve seen almost everything, so we know how to cover almost anything. Even a ‘Cactus Calamity'”. The ad then continues with a rendition of an event occurred on January 20, 2017, when a man throwing a barbecue party at his house in the desert saw a huge saguaro cactus, of which he had read that can live to be two hundred years old, falling on his house and damaging it. Asked how old he thinks his cactus is, the man answers, after seeing it fallen through the roof, that his guess would be “about two hundred”.

The commercial ends with Burke saying, while looking with the customer at the statue of the cactus with pieces of furniture stuck in its branches, “Gives houseplant a whole new meaning. And we covered it. Talk to Farmers. We know a thing or two because we’ve seen a thing or two”.