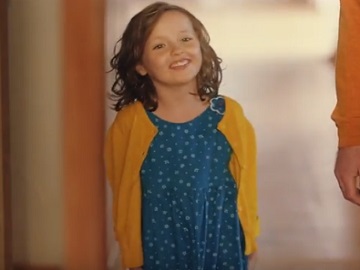 Experian continues its “Identity Protection Has a New Identity” ad campaign with a new spot, highlighting that identity theft has no age limit.

The 30-second spot, titled “Surprise”, features a father preparing breakfast for his kid and being interrupted by someone ringing the bell. Opening the door, he sees a detective and a police officer who are looking for his daughter. His surprise grows even bigger when he learns that a warrant had been issued on her name for fraud. At this point, the man’s little daughter shows up saying she’s Tayla Watson, leaving the investigators speechless.

“Millions of children have already been victims of identity theft, some never knowing until it’s too late,” the voiceover says at the end of the commercial, urging then viewers to protect their loved ones with Experian’s Family Plan. Viewers are also invited to start for free at Experian’s website.

The Family Plan, offering identity protection for two adults and up to ten children, costs $19.99/month after the trial period. To start your free 30-day trial membership in the Experian IdentityWorks Plus Family Plan, you will be required a credit card. The trial membership can be cancelled at any time within 30 days without charge. Among the services included in this plan are dark web surveillance, credit monitoring & alerts, Experian CreditLock, which locks your Experian credit file instantly to keep identity thieves away, and social network monitoring, which allows you to know if questionable content is appearing in your child’s feeds