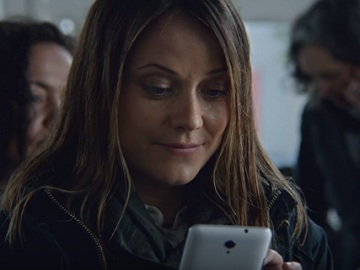 NYC-based financial services company E*TRADE has released a new commercial, encouraging people to start taking control of their finances and open an account with E*TRADE, so that they could do things their favorite social media stars do and, why not, earn more money than they do.

The 30-second spot, dubbed “You Like @Just_Marea”, features a woman who, while waiting in line to place her order in a coffee shop, is looking at photos and videos of an Instagram star whose account, @Just_Marea, has more than 25.000 followers. “There she is. Your friend @Just_Marea. She’s really good at social media. She buys stocks and companies that stand for something. You like her. She’s always up on the latest trends. She got in early on the whole goat yoga thing. And her sunsets are always ‘#nofilter’. You like her. But you’d like her better if you made more money than she does.” – the voiceover says, adding “Don’t get mad at @Just_Marea. Get E*TRADE”.

The company’s “Don’t Get Mad” campaign also includes other spots. One of the most recents ones, “You Like Your Brother-In-Law”, features a man as he makes the realization that he could like his really really likeable brother-in-law even more by getting E*TRADE and earning more money than him.

Previous: Samsung Galaxy A8 & A8+ Commercial: Lets You Be You
Next: Rocket Mortgage by Quicken Loans Basketball College Mascots Commercial