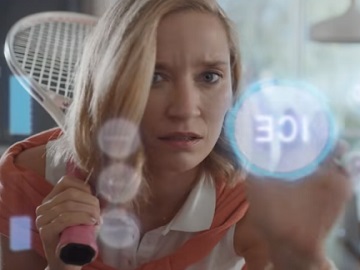 “There’s nothing more aggravating than technology that’s unnecessarily complicated. Luckily, you have E*TRADE, which makes trading quick and simple so you can take on the markets with confidence.” this is the idea behind the latest E*TRADE commercial.

The 30-second spot, titled “Home,” features a middle-aged man sitting at the kitchen table, working quietly at his laptop, while around him various things, that would certainly disturb other people, happen. “You should be mad at leaf blowers. You should be mad your neighbor always wants to hang out. And you should be mad your smart fridge is unnecessarily complicated,” the voiceover says, while on screen leaf blowers are seen blowing leaves around the man’s house, a neighbor is seen knocking on his window and his wife, who’s just come from tennis, “orders” from the voice-enabled fridge some ice and causes a burst of ice cubes in the kitchen, with obvious damage. The protagonist is not mad, at all, though, on the contrary. When an ice cube gets into his glass of water, he feels even more satisfied. But the real reason he is not mad is, according to the voiceover, due to the fact that he has E*TRADE, which “isn’t complicated” because “their tools make trading quicker and simpler so you can take on the markets with confidence”.

“Don’t get mad. Get E*TRADE and start trading today,” the voiceover adds at the end of the commercial.