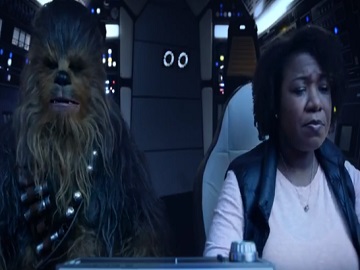 Esurance invites you to see, in its latest ad, how Esurance makes it easy to file a claim, and to catch all the action when Solo: A Star Wars Story opens in theaters May 25.

The 30-second spot opens with the Millenium Falcon and Chewbacca taking his seat as copilot near a woman who is ready to take off. “It’s ok, it’s ok, we got time,” she tells Chewbacca, who seems to be quite impatient. When a noise is heard from the back of the spaceship, he growls and, as the ad goes on, it turns out he is actually the personification of the woman’s husband. The setting is the parking lot of a supermarket, where an employee is handling a line of shopping carts. The woman had her car damaged while going in reverse, but, luckily, she can send damage photos for an appraisal and file a claim easily thanks to Esurance mobile app. “Seeing your real-life Millenium Falcon get damaged is painful enough. Filing your insurance claim shouldn’t be. Esurance makes it easy, so you can get on to your next adventure,” the voiceover says, urging then viewers to see Solo: A Star Wars Story in theaters May 25.

Directed by Ron Howard, the upcoming space Western film is centered on Han Solo (a character from the Star Wars franchise), who, according to the official synopsis, “through a series of daring escapades deep within a dark and dangerous criminal underworld,” “meets his mighty future copilot Chewbacca and encounters the notorious gambler Lando Calrissian, in a journey that will set the course of one of the Star Wars saga’s most unlikely heroes.” The cast includes Alden Ehrenreich as Solo, alongside Emilia Clarke, Woody Harrelson, Donald Glover, Thandie Newton, Joonas Suotamo, Phoebe Waller-Bridge, and Paul Bettany.

Esurance Mobile helps users not only to submit damage photos for an appraisal and file a new claim, but also to check their coverages, pay their bill, update their contact info, their payment method, see and send photos of their repairs, contact their dedicated claims representative directly, view and save their ID card, get roadside assistance, from finding service providers nearby in just a few taps to getting real-time updates and tracking their rescue on a map.