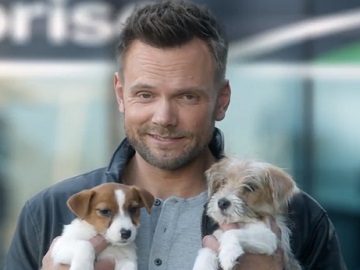 Enterprise highlights, in a new ad starring Joel McHale, that, as an Official Partner of the NCAA, Enterprise will go above and beyond to help you enjoy the tourney, even if they have to resort to puppies to cheer you up after an upset.

“Hey, everybody’s team loses sometime. I am personally sorry to hear that your bracket is busted. But, as an official partner of the NCAA March Madness, Enterprise will be here to pick you up.” McHale says on the 30-second spot looking at the camera and showing then a puppy he holds in his right hand. “Hey, the tourney isn’t over, so maybe you’ll win the next game. But in case not… We’ll be standing by,” he adds, showing off another puppy, that he’s holding in the other hand.

The 2018 men’s basketball Tournament Challenge consists in selecting the teams you think will win each tournament game from the first round all the way through the championship game. For each game you pick correctly, you will get points that will increase during each round of the tournament. If you score the most points, you’ll have a chance to win the grand prize of a $10,000 Amazon Gift Card and a trip to the 2018 Maui Jim Maui Invitational.