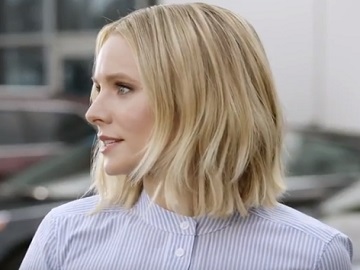 The 30-second spot features the actress asking an Enterprise representative to confirm that she can buy from Enterprise Car Sales and they’ll accept any trade-in. Once she hears the positive response, she says “Great!” and brings over a reclining chair. Informed by the company’s employee that it does need to be a vehicle, Kristen says she needs that items out of her house and suggests that maybe it would look good in his place, which leaves the man a little bit uncomfortable as he doesn’t find the words to refuse her.

The commercial ends with the voiceover saying “With a fair and transparent value for every trade-in, Enterprise makes it easy”.

Kristen Bell was announced Enterprise’s new spokesperson on December 23rd 2016. In a press release issued back then, Lee Broughton, vice president, Enterprise North American Brand Marketing, described the actress as “relatable, inviting and charismatic” and added “We know she will tell our story in an engaging way that really clicks with our customers.” Actor and comedian Joel McHale has also starred in an advertising campaign for Enterprise, highlighting all of the ways the company picks up its customers.