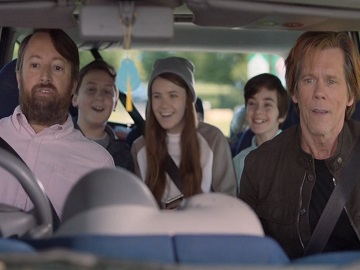 The UK’s biggest 4G network EE has launched a new ad campaign starring Kevin Bacon and David Mitchell to mark the launch of the its new brand platform and data gifting plans.

The two comedians co-star in a 30-second spot created by Saatchi & Saatchi London and aimed at highlighting that on EE’s award-winning network customers now can gift data to their family members when they need it most.

Kevin, David and his three kids are seen in a car, at a wildlife safari park. While the two men joke about the monkeys climbing all over the vehicle, the teenagers are complaining about not being able to change their fantasy football teams because they’ve run out of data.

Informed by Kevin that, on EE, it’s easy to gift his data to his family, David transfers 1GB of data to his daughter, who manages thus to switch her fantasy football captain. The ad also shows that, while David is busy to manage the “data gifting”, his hub cap, number plate, and various other car parts become the target of the mischievous monkeys.

EE’s new integrated campaign will run across TV, out of home, cinema, and video on demand, with edits and content developed specifically for a range of digital and social channels.

EE, which is UK’s largest operator and has the UK’s most advanced 4G LTE network with 4G available to 99 percent of the population, has also teamed up with Vue cinemas to promote its gifting plans for families and become the exclusive partner of Vue’s Family Ticket. The announcement will be made not only across the Vue website, but also in Vue cinema foyers, on popcorn boxes, and by geo-targeting cinema visitors via mobile.