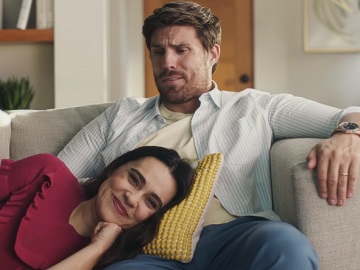 eBay highlights, in a hilarious new commercial, the importance of buying exactly what you want when it comes to couches and not settling for almost-right furniture.

The 15-second spot features a couple on a couch, talking about how much they love their couch. “We love it, right?” she asks her husband, who confirms. “Oh, totally. I do not wish it was mid-century at all,” he says. “Or longer,” she adds, trying to stretch her legs, but not having enough space, since the couch is modern and small, not mid-century and long, like they would have wanted.

“Don’t settle. Shop eBay for the design you really want with fast, free shipping,” the voiceover says at the end of the commercial, which sees the tagline “Fill your cart with color” flashing across the screen.

In another spot, a couple is seen talking about their speakers, whose design makes them don’t fit at all in the owners’ living room. The guy reveals he wishes they looked cooler and tries to forget about that by saying that “speakers are all about sound”.