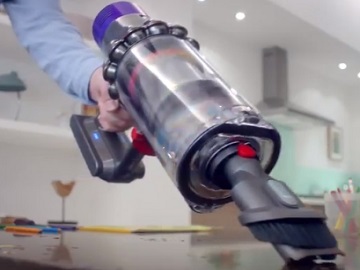 The 30-second spot opens with British inventor, industrial designer and founder of the Dyson company, James Dyson, talking to the camera about his ambitions and efforts. “Over the years, I’ve always tried to break new ground in vacuum technology. Now, with this powerful digital motor, a new era begins,” he says.

The ad also highlights that Dyson has reinvented the cord-free vacuum and that Dyson V10 Cyclone “is now your big machine to deep clean right through the home.” “So powerful in fact we’ve stopped developing corded vacuums,” James Dyson reveals at the end of the spot, before the strapline “Say ‘Goodbye’ to big, corded vacuums.” flashes across the screen.

The Dyson Cyclone V10 cord-free vacuum was unveiled on March 6, 2018, at an event in New York City, where James Dyson also explained why he has stopped developing corded vacuums.

The founder of the Dyson company has also founded a foundation, called The James Dyson Foundation, which is dedicated to “encouraging young people to think differently, make mistakes, invent and realize their engineering potential.” Since 2006, thousands have entered the prestigious international student design competition the James Dyson Award, where the prize consists in $45,000. Entrants, however, have realized that this competition also gives them the chance to make their designs known by an international audience, with many valuable potential outcomes.