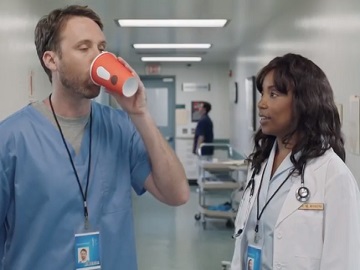 Dunkin’ advertises its new handcrafted espresso drinks in a series of ads, part of the new fully integrated campaign “Sipping is Believing”.

One of them features a nurse informing a co-worker about the Dunkin’s new line of handcrafted espresso drinks, which are “supposed to be good,” and sipping from his for so long that he is unable to carry on the conversation. His interlocutor finds herself forced to read subtitles of his thoughts to understand his messages. Thus, viewers also get to learn that he can’t take away his drink – the new Dunkin’ latte – from his mouth because is “too delicious,” and – from another hospital worker showing up with a Dunkin’ drink at his mouth, that “there’s birthday cake in the break room”.

The commercial ends with the voiceover saying the tagline “Sipping is Believing” and introducing the new handcrafted medium cappuccinos and lattes for $2.

In the other two spots part of the new campaign, the chain features, in one of them, two office workers surprised that the Dunkin’ espresso drinks are so good and find out that their extremely young-looking boss is actually 48 and showcases, in the other spot, a faux fashion line called “Espress-Wear,” that includes pieces for espresso lovers who also love clothes that hold espressos, such as Cappu-Chinos, Americano-Veralls and Latte-NK Top.