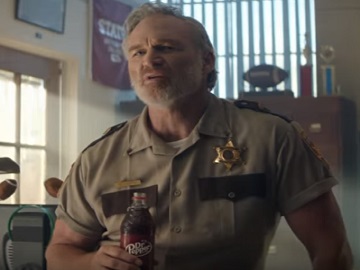 Dr Pepper has released a special 2-part season finale of Fansville, a series set in the fictional town of “Fansville,” that parodies TV show dramas.

For now, the brand has dropped the part 1, dubbed “Unusual Suspects” (note: Unusual Suspects is also the title of an American documentary television program on Investigation Discovery, that showcases many of the most shocking and difficult cases in law enforcement history, and also sheds light on the investigations that led to the arrest of the culprits). The clip reveals that the National Championship Trophy has been stolen and everyone is a suspect.

“Who would steal the trophy?” a fan holding a bottle of Dr Pepper asks, in one of the scenes, the sheriff, who’s holding a can of Dr Pepper. “He’d have to be a big fan,” the sheriff replies. Other residents are also featured in tense moments, some of them feeling accused by their dear ones and others being in the investigation office. The end of the teaser sees a mysterious grey-haired man in jail, presented as “your ticket man” to the sheriff.

Viewers are left then waiting for the sequel, an onscreen line revealing that part 2 will follow on January 7, 2019. The voiceover mentions, as always, that Dr Pepper is the official drink of Fansville. Fansville, described as “a town where every day is Saturday and everyone is a fan, literally,” has been the setting for many other stories.

One of them has as protagonists a cheerleader and a mascot of rival schools, that express their love for each other, knowing that their shared love of Dr Pepper can supersede the rivalry, another one features a promising young tailgater who’s worried about whether he will still be able to grill and explains that his other hand is “the Dr. Pepper hand”, another one, titled “Encroachment,” features the town’s sheriff (played by Brian Bosworth) being asked to intervene when a new family moves to the neighborhood. The football fan knocking at his door (played by Nick Ballard) to inform him that his new neighbors are referees says he doesn’t need the new neighbors’ whistles to keep him up at night. The residents’ complaints are also targeting the cameras the new neighbors are installing, but the sheriff, noticing the six-packs of Dr. Pepper unloaded from the moving truck, states he’s “out” and suggests that they should give the new neighbors a chance. He then tries to get closer, but is kept at a distance by one of the family’s kids.

Since 2014, the soda brand, a sponsor of the College Football Playoff, has relied on the concessions character Larry Culpepper, created by ad agency Deutsch in 2014 and played by actor Jim Connor, to carry its college football message. Earlier this year, though, in May, he was sidelined. After the news spread, a Dr Pepper spokeswoman praised the character’s work and informed that the brand’s football-related advertising will be taken in a new creative direction.