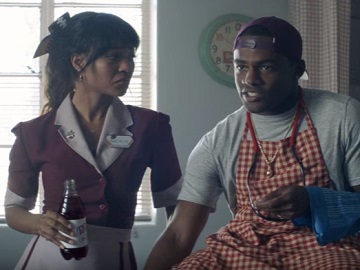 Dr Pepper has released a new installment in its newest college football campaign, that is set in a fictional town called “Fansville” and parodies TV show dramas.

Titled “X-Ray,” the spot features a promising young tailgater paying a visit to the town Doctor (plated by Eddie George) to check his hand. The latter informs the youngster, who’s worried about whether he will still be able to grill, that the season is over. Highlighting that he is a grill master and this is what he does, the patient waits for a solution, but, when the Doctor suggests using the other hand, the patient’s girlfriend states the other hand is “the Dr Pepper hand”.

A scene from the next episode on Fansville shows the young man dealing with some burgers on a grill, under the Doctor’s worried looks, and his girlfriend cheering on him.

Fansville, described as “a town where every day is Saturday and everyone is a fan, literally,” has been the setting for many other stories. One of them has as protagonists a cheerleader and a mascot of rival schools, that express their love for each other, knowing that their shared love of Dr Pepper can supersede the rivalry.

The soda brand, a sponsor of the College Football Playoff, has since 2014 relied on the concessions character Larry Culpepper to carry its college football message. Culpepper, created by ad agency Deutsch in 2014 and played by actor Jim Connor, was sidelined, earlier this year. In May, a Dr Pepper spokeswoman praised the character’s work and informed that the brand’s football-related advertising will be taken in a new creative direction.