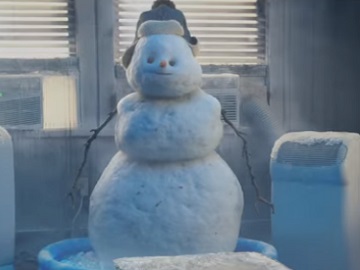 Doritos advertises its Blaze chips in a new spot, featuring a snowman that melts after tasting the chips.

The commercial features two friends returning home with a bag of Doritos Blaze. One of them greets the snowman, Dave, who has the necessary environment for him to stay frozen, and, after putting on a winter hat, starts munching on the chips. When he drops the bag on the table, a few chips fall on it and Dave grabs one. Unfortunately for him, he immediately melts after tasting it.

“Doritos Blaze. A bold flavor that brings the heat”, the voiceover says at the end of the spot.

Doritos Blaze has also been advertised by Morgan Freeman. In Pepsi Co.’s Super Bowl LII commercial, he stars together with Peter Dinklage in a face-off. While the latter is rapping Busta Rhymes’ “Look at Me Now” in front of a fire while eating Doritos Blaze, the award-winning appears rapping Missy Elliot’s “Get Your Freak On” and sipping a Mountain Dew Ice. The spot marked the first time a company has advertised two of its trademarks back-to-back in one nationally televised Super Bowl commercial.

Doritos Blaze is the brand’s next national offering, featuring a complex flavor and heat that builds as you crunch.