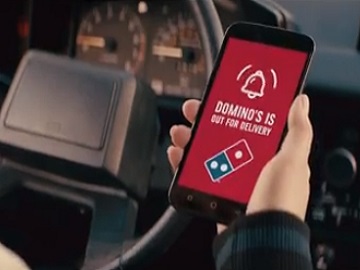 “When you order Domino’s, use Domino’s new Dinner Bell feature to be the pizza night hero that brings them home. When it rings on their devices, they’ll come running for their mix-and-match favorites,” the voiceover says on the 15-second spot, which features a father making a hand sign to his wife and kids to come and enjoy their Domino’s order while it’s hot. While he’s shown standing in front of the door, ready to welcome them, the kids and their mom are seen rushing towards the house, eager to indulge themselves with their favorites.

The commercial ends with the voiceover urging viewers to choose any two or more for $5.99 each.

“Domino’s virtual dinner bell makes that job easier, as it rings right on everyone’s phones, no matter where they are, so that everyone is ready to enjoy their piping-hot pizza together,” Dennis Maloney, Domino’s chief digital officer, said in a press statement. In order to be able to use Domino’s dinner bell feature, customers must have the most recent version of Domino’s mobile app and a Pizza Profile. Once logged in, they can invite friends and family to join their dinner bell group. When the group leader places an order, they can ring the bell to notify family and friends that the order has been placed. When Domino’s Tracker says the order is out for delivery, it will automatically ring the bell again to remind everyone to get to the table as soon as possible.