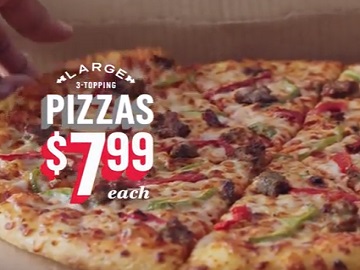 The voiceover even says “This is a logo from Domino’s” as the pizza chain’s logo flashes across the screen and “This is the end of the commercial from Domino’s”.

In another recent commercial, Domino’s advertises the Dinner Bell function available on the Domino’s mobile app, which “rings right on everyone’s phones, no matter where they are, so that everyone is ready to enjoy their piping-hot pizza together,” according to Dennis Maloney, Domino’s chief digital officer. In order to be able to use Domino’s dinner bell feature, which was launched earlier this fall, on September 25, customers must have the most recent version of Domino’s mobile app and a Pizza Profile. Once logged in, they can invite friends and family to join their dinner bell group. When the group leader places an order, they can ring the bell to notify family and friends that the order has been placed. When Domino’s Tracker says the order is out for delivery, it will automatically ring the bell again to remind everyone to get to the table as soon as possible.