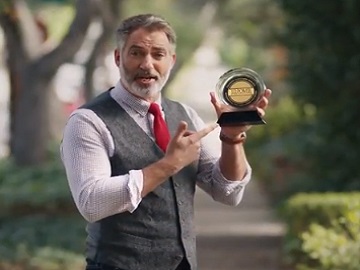 DISH has released a new ad, thanking its customers for being ranked #1 in Customer Service.

The 30-second spot features the Spokeslistener (played by British television, film and theatre actor Harry van Gorkum) holding the J.D. Award and talking to the camera. “We’d like to say thank you to our customers for this J.D. Award. DISH constantly innovates better ways to get TV.” he says, asking then “But how?” The answers come from DISH customers, who list the 2-year TV price guarantee, the DVR, described as “the most innovative” and the remote finder feature. “You have the same bill for two years unlike other TV companies”, “You have the most innovative DVR,” “And if you thought to build in a remote finder, imagine what else you’ll think of.” they say.

The commercial ends with the voiceover saying “DISH is ranked #1 in Customer Service by J.D. Power and our customers” and adding the company’s tagline, “Tuned in to you”.