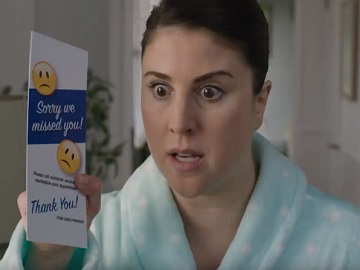 DISH highlights, in a new commercial, that DISH has been ranked #1 in Customer Service nationally (by J.D. Power and its customers) and urges viewers to stop waiting for the cable guy and get, instead, reliable 75-minute arrival windows with the DISH MyTech app.

The 30-second spot features a young woman telling the Spokeslistener she can’t believe she’s still waiting for the cable guy. “That’s it. I give up. I’m taking a shower.” – she says, heading then to the bathroom. While she’s in the shower, she hears the bell ringing and hurries up to open the front door, but she doesn’t make in time. The cable guy left her a note with the message “Sorry we missed you!” glued to her door, which drove her crazy.

“Seriously! An entire day wasted for this!” – she shouts exasperated, showing the Spokeslistener the note. “I hear you.” – the latter answers, adding “Now, let’s change that!”. “Yes!” – she replies in a determined voice.

The commercial ends with the voiceover urging viewers to stop waiting for the cable guy and get reliable 75-minute arrival windows with DISH.

He also adds that DISH has been ranked #1 in customer service nationally by J.D. Powers and the company’s customers.