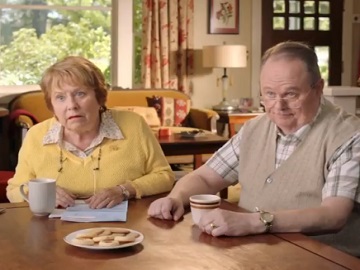 DISH highlights, in a new commercial, that it offers its customers a 2-year price guarantee so that they get the same bill every month.

The 30-second spot features an old lady and her husband sitting at a table in their living room, telling someone who is not seen that she is “spittin’ mad” about how her old TV bill would “change willy nilly”. “And out of nowhere, this DISH fellow showed up and he started bobbling his head and I said ‘Are you ok? Can I get you some water?’ And he said ‘I’m fine. I’m listening.’ It was freaky,” the woman says. “A good freaky,” her husband adds. Finally, it turns out they are talking to the DISH Spokeslistener, played by actor Harry van Gorkum.

The commercial ends with the voiceover saying “The DISH 2-Year Guarantee. Same bill every month, no willy nilly.” and adding the tagline “Tuned In To You”.

Launched in February 2017, with a series of ads produced by Havas Worldwide’s creative agency Camp + King that carry the tagline “Tuned In To You”, DISH’s “The Spokeslistener” campaign focuses on the company’s technology, like the Hopper DVR with auto ad-skipping and streaming features as well as Netflix integration, customer service, and affordable and flexible TV packages.