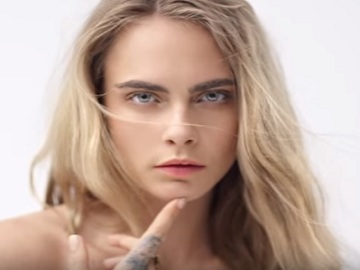 Dior has released a new ad starring Cara Delevingne as the face of its new skincare range, Capture Youth, designed to fight the first signs of aging.

The 25-year-old model fronts the campaign targeted at millennials and women in their thirties willing to deal with aging and skin concerns. The new skincare line, launching this month, includes five serums that “are 85% natural” and have lifting, soothing, mattifying, plumping, and glow-boosting effect thanks to the PAOT Technologies, which the house of Dior helped develop alongside the European Institute of Antioxidants.

In the 15-second spot, Cara Delevingne recites a short poem, titled “Woman”. “Women, woman, woman. I am a woman. Yes, I am. And nobody can do it like we can.” – she says looking at the camera while sporting an all-natural look. Dior revealed Cara as the ambassador of Capture Youth line in October 2017. The collection, that will be available for purchase starting January 17, includes Plump Filler, Glow Booster, Lift Sculptor, Matte Maximizer, Redness Soother, and an Age-Delay Advanced Creme.