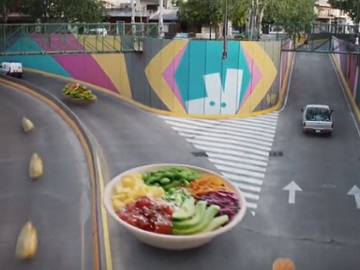 British online food delivery company Deliveroo encourages people to “Eat more amazing” in its latest TV ad, aimed at highlighting that, by using the Deliveroo app, you can have amazing food delivered from your favorite restaurant to your front door.

The spot, part of the global brand campaign “Eat more amazing”, launched last month, on February 21, features a range of both traditional and unconventional takeaway foods travelling through the city, alongside cars and buses, to get to the front door of those who ordered them through the Deliveroo app. Huge burgers, a big slice of pizza, sushi, various salads, and even macaroons and ice cream are seen on their way through the city streets, while in the background the popular song “All I Have to Do Is Dream”, released as a single in April 1958 by the American country-influenced rock and roll duo The Everly Brothers and made famous by them, is playing.

The campaign runs across outdoor, radio, mobile, social, experiential and direct mail. On March 13, for instance, people passing by the Old Truman Brewery in London had the chance to see a four metres tall and six metres long billboard made out of burgers (burgers made by one of Deliveroo’s restaurant partners) and even pick up one. The food delivery market features a growing competition in the UK with Just Eat, UberEats, Hungry House and Amazon Restaurants trying to constantly raise brand awareness. Worldwide, the largest five companies in the sector are Deliveroo, Just Eat, GrubHub, Delivery Hero, and Takeaway.com.