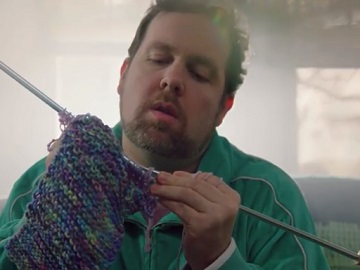 The campaign includes several spots released as episodes whose protagonist, amateur investigator Lewis Reynolds, uncovers the mystery behind his friends’ new spending habits. “You see it all the time. Friends buying things they shouldn’t be able to afford. How are they doing it? Where’s the money coming from?” is the idea behind the series, which follows Reynolds on his quest to find out where the money is coming from.

The first episode, “Organized Crafts”, introduces Reynolds’ friend Steve Harper, who’s been seen lately with multiple shopping bags and mysterious new friends, all wearing matching track suits. Willing to identify the source of the money for Steve’s shopping sprees, who has also started to use “hand-carved weapons” (knitting needles, as shown in the film), the investigator has set up a wall of clues that he’s trying to piece together and find the answer to his burning question, “Has Steve joined the Mafia?”. Soon it turns out, though, that Steve just uses Cricket Wireless now and this saves him “a little dough”, which he can spend on what he loves, in this case, knitting. The truth is Steve is not part of the Mafia, but of a knitting circle. “Holly craft!”, Reynolds exclaims, shocked to learn the news. He asks for clarification on the shopping bags and the old people, whom he believed were mafiosos, and the matching tracksuits, and is informed that they are just old people who just like tracksuits because they’re comfortable.

“Today, we uncovered a conspiracy even larger than the Mafia. Young men using their savings through Cricket to do what they love: knit in a semicircle with elderly folks.” Reynolds concludes and the tagline “Smile – You’re on cricket wireless” flashes across the screen.