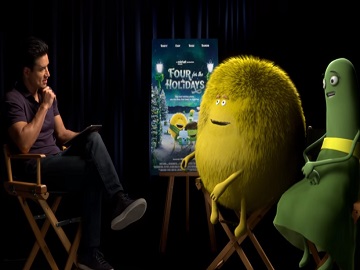 Cricket Wireless has released a video showing the best moments from an exclusive sit down, where Mario Lopez interviews Dusty and Rose, the stars of the company’s new holiday film “Four for the Holidays”.

The clip features Lopez and the two mascots live from Cricket studios taking a few questions from viewers, such as if they are really live, if they’re stopping in Austin, Texas, to promote the film, and if Dusty is a natural blonde.

Cricket’s “Four for the Holidays” film, from agency Argonaut, San Francisco, opens with Dusty, Rose, Ramon and Chip on set, filming a commercial for the network, in which they sing about how Cricket keeps them “sharrier” with four lines of unlimited data for $100/month.

The four cuddly characters are then heading out and, when Dusty comes up with the idea to gather on New Year’s Eve and watch fireworks from the power tower, they start finding excuses for not being able to do that. Ramon says he will still be in Mexico, Chip says he will be in New York and Rose says she will still be in Aspen. Eventually, they all realize “The best holiday plans are the ones that bring us together” – which is also the idea that serves as a tagline for the holiday campaign.

The commercial is also available as shorter versions that feature the animated mascots singing the song about Cricket’s offering.