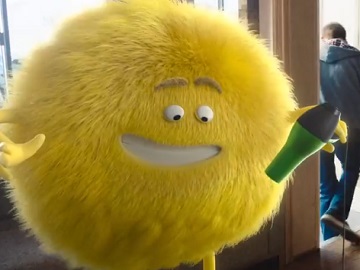 Cricket Wireless has released a hilarious new ad to highlight that you can get 4 lines of unlimited data for $100/month plus 4 free smartphones when you switch.

The 30-second spot, titled “Preparations,” features Cricket, the fluffy yellow mascot, singing in the shower about the company’s offer. “Get four lines of unlimited data for a hundred bucks a month, plus four free smartphones when you switch,” Cricket sings in and out of the shower, while blowdrying his hair. When a crew member opens the door to tell him something, finds an unexpected view: Cricket singing and the towel falling on the floor.

The ad specifies that the price of $100/month is valid after $30 credit on 2nd line & $45 credit each on 3rd & 4th lines. It is also informed that first month service charge and applicable sales tax are due at sale. After 22GB/line/month, Cricket may slow data speeds when network is congested. The $55/month Unlimited Plan is required on 4 lines. Free smartphones applies to moto e3, Cruise and Alcatel VERSO.

Announced in September 2017, Cricket Unlimited 2 plan is an expansion of a plan that was previously only available for those with 2 lines and features unlimited talk, text and data (with data speeds limited to 3 Mbps).