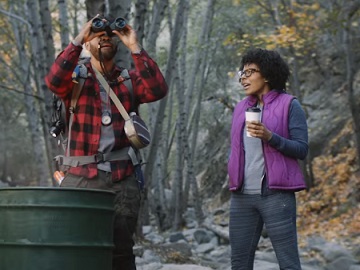 Titled “Off the Grid”, the 30-second spot opens with J.D. in a forest burning down a loan application that was denied and throwing it in a metal barrel. “Goodbye cruel credit world!”, he says as he leaves the burning piece of paper turning to ashes in the barrel. Asked by his girlfriend if he is sure about this, he answers that, “in the wild, nobody cares about your bad credit”, while looking around with binoculars. The woman asks him if he doesn’t want to check with Credit Karma before going off the grid and, hearing his reply, that he belongs to nature now, reminds him that he hates nature. The next shots come to prove that what she said is quite true: he is seen spraying around himself a ton of fly spray and getting scared by the noise made by a squirrel. The woman insists on him trying Credit Karma and gives him her smartphone to use the app and check his score, which it turns out isn’t that bad, but it only needs work.

The spot ends with the voiceover urging viewers to check their credit for free with Credit Karma and adding the company’s tagline, “get knowing”.

Most known for his sketches and impersonations, J.D. Witherspoon is following behind his father, comedian-actor John Witherspoon. He has also appeared in the “We’re All Gamers” commercial by eSports company ESL and in a Honda commercial.