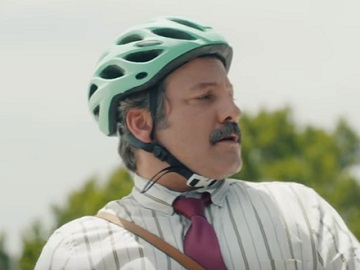 Credit Karma continues its Know Your Odds campaign with a new commercial, featuring a middle-aged man at a skate park.

The 30-second ad shows the man approaching a group of teenagers and strutting about, but ending up on his nose after riding his tricycle down the slope. At the end, as the kids are grabbing their phones to take photos of the “hero of the day,” the voiceover highlights, with the help of the fallen man, that while the “Odds of dominating the skate park” are “not great,” the “Odds of getting approved for a credit card” are “pretty great”. Viewers are then encouraged to find their odds at Credit Karma.

The Know Your Odds campaign also includes other five different ads, featuring a guy who, after having used a product called “Hunky Head” in the attempt of getting rid of his baldness, finds himself still bald, but with long hair coming out of his ears and nose, a man reincarnated into a worm that ends up being eaten by a pigeon, a woman at a potluck, whose odds of being asked for the recipe are not great at all, a guy whose odds of beating his genetic clone in a fight are not great either, and a married couple whose odds of having sex again are not great since they spend their evenings on their devices.

Credit Karma has been offering a monthly credit score through its free online credit report and credit monitoring service since 2007, when it was founded. The score provided by Credit Karma is VantageScore 3.0, which was developed by the three credit bureaus – Equifax, Experian, and TransUnion – as an alternative to the FICO scoring model. The company also helps consumers track, maintain and improve credit health
with free tools and information, provides recommendations for credit card and a variety of loans, and free federal and state income tax preparation, a recent feature introduced for the Tax Year 2016 filing period in 2017.