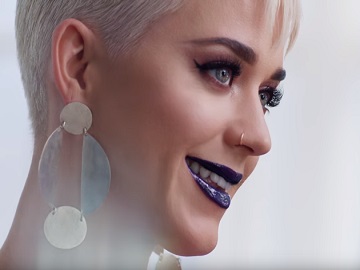 The 30-second spot, part of the #IAmWhatIMakeUp campaign, features the artist, described as COVERGIRL’s “favorite singer, songwriter, and chameleon”, revealing some interesting things about her preferences by answering a few “This or That” questions. Throughout the ad she is seen sporting some of the twelve high-pigmented shades including Candy Cat, Cobalt Blue, Tabby Tease, and others. Thus, viewers find out that she prefers “late night” rather than “early morning” and that she believes it is better to be real than relevant. Between “fancy” and “fierce” she chose the last one, between “habit” and “impulse” chose the last one, and between “noticed” and “known”, chose the last one, as well.

Katy Kat Gloss, which – according to COVERGIRL – “gives you the shiny lips that you’ve been looking for with a soft and creamy, moisturized feel”, is available for purchase for $7.99. Now, you can buy one and get one at 50% off.