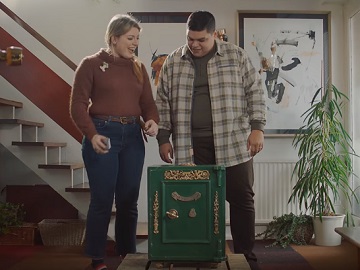 ClearScore has released a new advert, featuring a “money cautious” guy who buys a fancy steel safe to protect his finances.

The 30-second spot, titled “Wallet Safe”, opens with the man having the safe delivered to his front door and informing his girlfriend, who’s just going down the stairs, that the new wallet has arrived. “That’s not a wallet, it’s a safe,” she says, looking at the huge fire resisting safe. Her partner explains he’s just being “money cautious”, which makes her say she’s cautious too and reveal she’s got ClearScore. She then tells him that ClearScore app “tracks your financial history, gives you a monthly report, alerts you to any changes, and it’s completely free.” “Free, is it?” the guy asks, showing signs of regret that he purchased the safe. “Yeah, but it’s no way as cool as this!” she answers, referring to his safe, realizing that she was about to rain on his parade. “Yeah?” he asks, willing to have a confirmation, which he gets. However, the girl’s enthusiasm soon vanishes as she starts to look into her ClearScore app, making her boyfriend feel quite uncomfortable.

“ClearScore. Get your money sorted,” the voiceover says at the end of the advert.

Fans couldn’t help but notice Moose’s absence and wonder if the cute talking dog will star in new ads for ClearScore. The chocolate brown boxer, who’s been helping his owner, Charlie, check his credit score and stay on top of his finances, has been the face of ClearScore’s TV adverts since July 2016. He appeared in several adverts and he even had lines that became catchphrases, like “Wat Doing?”, “Okay, I come to!”, and “Where going?”.