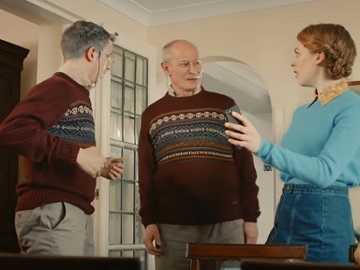 ClearScore has released a new advert, featuring this time a big sister who advises her brother to sort his finances so that he wouldn’t risk turning into his father.

Titled “Dad”, the 30-second spot opens with the young woman entering the dining room, where her brother, Frankie, is doing a 1000 piece puzzle. “Hey, Frankie, you should think about moving out or you’ll start turning into dad,” she tells him and suddenly notices how Frankie is growing a white mustache. “No, I won’t.” he answers, but he’s obviously having some doubts on that. His sister then reveals she uses ClearScore and says they helped her got on top of her finances, so she could get her own place. “Everything, from my free credit score and coaching to the best credit card and loan deals to me,” she also says, showing the ClearScore app on her smartphone, while Frankie is seen turning into his father. When the latter shows up and Frankie is faced with the cruel reality, she asks him to give her his phone to have the app installed. After taking out a handkerchief, Frankie finally finds his phone, which is an old phone that it turns out is his father’s phone.

The advert ends with the voiceover saying the company’s tagline, “Get your money sorted.” This spot seems to draw inspiration from Progressive Insurance’s “Parentamorphosis” ad campaign, which highlights the changes that occur after people buy a home and become more like their parents, released with the tagline “Progressive can’t protect you from becoming your parents, but we can protect your home and auto”.

Moose’s absence has been noticed by fans, who are now wondering if the cute talking dog will star in new TV spots for ClearScore. The chocolate brown boxer, who’s been helping his owner, Charlie, check his credit score and stay on top of his finances, has appeared in several ClearScore ad campaigns since July 2016. Besides his expressive face, he also had short lines that became catchphrases, like “Wat Doing?”, “Okay, I come to!”, and “Where going?”.