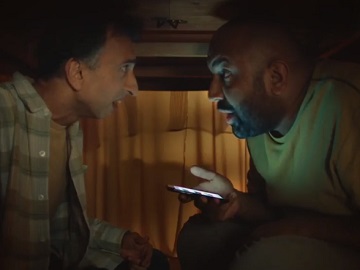 ClearScore has released a new TV ad, featuring two adult brothers hiding under a table to escape from their dad and his “finance talk”.

Titled “Under the Table”, the spot opens with one of the siblings, named Martin, joining the other, who’s hiding from their dad, under the dining room table. Asked if he’s hiding from dad, as well, Martin confirms, saying their dad is back on at him with the “finance talk”. “He says if we’re struggling, we should use ClearScore,” his brother says, holding his smartphone in his right hand. “It shows you how to improve your credit score and recommends the best credit cards for you, for free. So taking back control of your finances is simple,” he adds, which makes Martin realize they wouldn’t need to be hiding under the table in this case.

The spot ends with the two men remaining under the table when their father calls them, confident that he won’t find them there when actually they can be easily spotted due to the phone light.

ClearScore’s ads have stood out so far thanks to Moose, the cute talking dog who’s helping his owner, Charlie (played by …) check his credit score and stay on top of his finances. Moose, a chocolate brown boxer, has been the face of ClearScore’s TV adverts since July 2016. His catchphrases are “Wat Doing?”, “Okay, I come to!”, and “Where going?”.