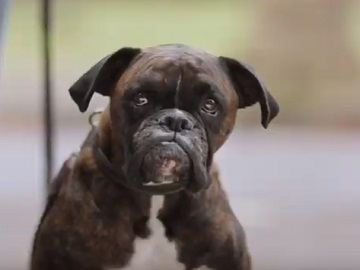 Moose is back to the small screen. ClearScore has released a new advert featuring the company’s longtime mascot and his owner, Charlie, who recommends ClearScore to his friend who’s looking for a way to get on top of his finances.

The 30-second spot, titled “Ruby & Moose,” shows Charlie meeting his friend Rich and asking him about his plans for the weekend. When the latter tells him that he wants to deal with his finances, but doesn’t know where to start, Charlie recommends ClearScore, explaining that, “with ClearScore, you can track your money in one place, help you find credit cards, loans tailored to you and it’s for free.” Rich also reveals they’re moving out because it’s got cramped since Ruby’s all grown up. At this point, Ruby, who it turns out it a boxer – just like Moose, is shown in the doorway. “Wat doing?” Moose asks shyly, adding after just a few seconds, “Ok, I love you!” “ClearScore, get your money sorted,” the voiceover says at the end of the advert.

This year, ClearScore has been promoting its services in ads that didn’t include its longtime mascot Moose. The cute chocolate brown boxer, who’s been helping his owner, Charlie, to check his credit score and stay on top of his finances, has appeared in several ad campaigns for the London-based financial technology company since July 2016. Besides his expressive face, he also had short lines that became catchphrases, like “Wat Doing?”, “Okay, I come to!”, and “Where going?”.

The ads released by ClearScore this year were focused on the services provided – for free – by the company, such as credit score, tips on how to improve your credit score, recommendations of the best credit cards and loan deals for you, and the ClearScore app, which tracks your financial history, gives you a monthly report, and alerts you to any changes.” Two adult brothers hiding under a table to escape from their dad and his “finance talk”, a “money cautious” guy who buys a fancy steel safe to protect his finances, and a young man who turns into his father are among the protagonists of the spots released by ClearScore in 2018.