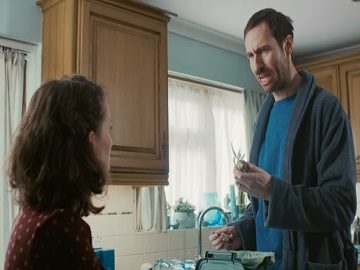 A couple that are saving for a house deposit discuss buying an avocado in the latest ClearScore advert.

The funny 30-second spot features the man landing on his wife after finding the pit of an avocado in her lunch box.

“What’s this?” he asks her and, without waiting for an answers, adds “We’re saving for a house deposit, Amanda! Not splashing the cash on… avocado!” The woman tells him that, since using the ClearScore app, she’s been tracking all their finances in one place, so “eating an avocado just made sense.” She then informs him that ClearScore recommends the best mortgage deals for them, based on their credit scores, all for free. Upset, he leaves the kitchen, saying he’s been eating bread sandwiches for six months.

The advert ends with the voiceover saying the company’s tagline, “Get your money sorted”.

This year, ClearScore has been promoting its services in ads that didn’t include the longtime mascot Moose. The cute chocolate brown boxer, who’s been helping his owner, Charlie, check his credit score and stay on top of his finances, has appeared in several ad campaigns for the London-based financial technology company since July 2016. Besides his expressive face, he also had short lines that became catchphrases, like “Wat Doing?”, “Okay, I come to!”, and “Where going?”.

Launched in 2015, ClearScore was the UK’s first service giving consumers free access to their credit score and report. Its initial offering, which featured credit scores and reports only, was subsequently upgraded to include also credit card and personal loan offers, car finance offers, a a credit history feature called “Timeline”, and a chatbot to help users improve their credit. In December 2015, the company launched the UK’s first credit checking app.