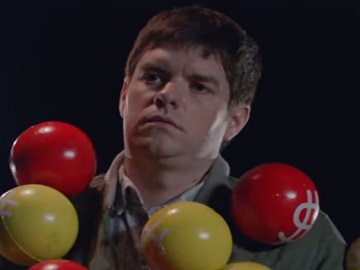 Online-only used car dealer Carvana, that allows customers to shop, finance, and trade in cars through their website, has released a series of new ads released with the tagline “Don’t Play the Game”, promoting its services.

One of them, titled “Fastlane” and aimed at highlighting that “you’ll never play the hidden fees game, or any games, when you buy your next car at Carvana.com”, features a guy named Stan who’s entering a dealership to pick up his SUV. While several people are queing in front of the “Waiting Game”, Stan opens the door to “Fast Lane”. In theory, all he has to do is pick up the car and sign the contract, but, once in the Fast Lane room, he falls into “The Back Room” where he must play “Fee Spree”. After this hidden fees game, he finds himself charged with other $2.600 before being given the contract, which he signs off. “Thanks for playing, Stan!”, a voiceover is heard saying, while Stan is down on the floor, putting his signature on the agreement.

The commercial ends with a female voiceover saying “Don’t play the game! Save up to $2000 vs. the dealership. At Carvana. The new way to buy a car”.