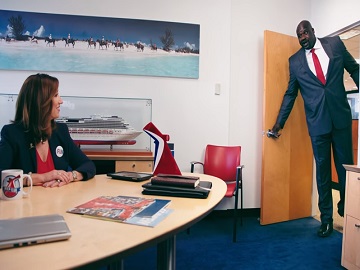 NBA Hall of Famer is seen in a 60-second spot in which Christine Duffy, Carnival President, assigns him this role.
“We, at Carnival, take our mission to be America’s most fun vacation very seriously. So I’m making changes at the top effective immediately.” – Duffy says while on screen Shaq is seen entering the company’s headquarters for his first day at work and throwing himself over the reception counter. Duffy states that “Mr. O’Neal is perfect for the job” thanks to his “unparalleled passion and unique business acumen”, which are “a tremendous asset”.

O’Neal’s job involves promoting Carnival’s ships through engaging video content, social media and other forms of marketing. In one of the spots, Shaq is onboard Carnival Vista, taking viewers on a tour of the ship and showing them attractions like the SkyRide, Guy’s Burger Joint, and the Havana Pool.

Carnival has announced that, this spring, in April, its next cruise ship, Carnival Horizon, will be launched, offering some new features, like teppanyaki restaurant and Guy’s Pig & Anchor Bar-B-Que Smokehouse Brewhouse, helmed by celebrity chef Guy Fieri.