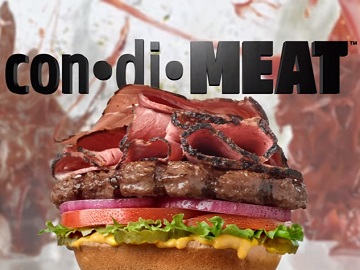 Carl’s Jr. showcases, in a new ad, its “high and meaty” Pastrami Thickburger, which is back on the chain’s menu for a limited time.

“Bye, bye, condiments. Condimeats is in the house,” the voiceover says at the beginning of the 15-second spot, which features the burger, made with juicy pastrami on a 1/3-lb. charbroiled Black Angus beef patty, red onion, lettuce, tomato, pickle and mustard, all on a premium bun.

“Juicy pastrami on Black Angus beef. It ain’t squeezed on, it’s layered on. The Pastrami Thickburger, only at Carls Jr.,” the voiceover also says.