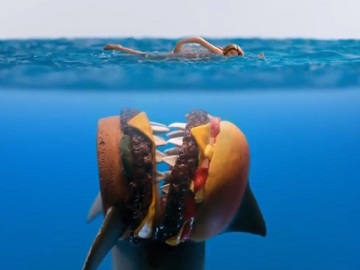 Carl’s Jr. pays tribute to Steven Spielberg’s latest movie, Ready Player One, which opens this Thursday in theaters, by changing the name of its mini-hamburgers, now called Charbroiled Sliders, to SpielBurgers.

The burger chain has released a series of five ads, each introducing a SpielBurger named after five movies from the legendary director’s portfoglio. Close Encounters, E.T., Jurassic Park, and Jaws are the other four, which served as inspiration for the setting and “characters”. The SpielBurgers are, obviously, incorporated into the ads. An UFO in the shape of a hamburger and a clown riding a bike and carrying a hamburger in the bike’s basket are, for instance, the way the SpielBurgers are shown to the world.

Charbroiled Sliders, available on the menu at $1, will be promoted on social media with the new name, with no changes though to menu boards or in-store signage.

In the past years, Carl’s Jr. promoted also other movies including X-Men: Days of Future Past, Man of Steel, and The Amazing Spiderman.

Ready Player One, based on the novel of the same name by Ernest Cline, is set in a dystopian 2044 and follows teenager Wade Watts on his search for an Easter egg in a worldwide virtual reality game called OASIS, created by James Halliday and announced through a video after his death. The first person to find the egg would inherit his entire fortune and corporation.