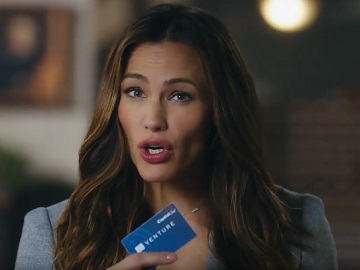 Jennifer Garner stars in a new Capital One commercial, promoting the company’s Venture card, which allows users to earn unlimited double miles on every purchase.

“With the Capital One Venture card, you’ll earn unlimited double miles on every purchase, every day. Not just airline purchases. Think about all the double miles you could be earning.” – the actress whispers as she is in a library. “Holly Molly! That’s a lot of miles!” – the lady at the reception shouts, as it turns out Jennifer was telling her about the Capital One Venture card. At this point, a man shushes her and the woman raises her shoulders as if she couldn’t help it.

Jennifer Garner, who became Capital One’s spokesperson in 2014, appeared in several other spots, set in different places, from an airplane, to a mall, to talk about the Venture Card and its benefits. In 2016, she starred in a commercial with her father William “Bill” Garner, in honor of “Bring Your Father to Work Day”.