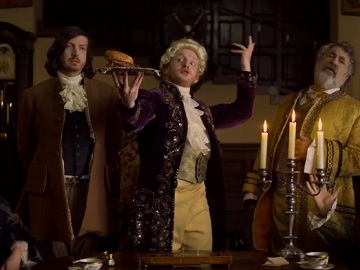 Capital One has launched a new commercial, promoting its Savor Card, which enables users to earn 3% cashback on dining, 2% on groceries, and 1% on all other purchases.

Titled “Sandwich”, the 30-second ad nods at the origins of the word “sandwich”. Set in Sandwich, England, 1762 (the historic town within the ceremonial county of Kent and the year when John Montagu, the 4th Earl of Sandwich, “invented” the sandwich), the spot recreates the scene of Montagu coming up with the name of “sandwich” for the thing he had received. He reportedly asked for meat to be served between slices of bread to avoid interrupting a gambling game and when he received it, he decided to name it “The Sandwich”.

“There was a time when the next big thing in food was stuffed between bread. Now, the next big thing is the Capital One Savor Card.” – the voiceover says, mentioning that you can get 3% cash back on dining, 2% on groceries, and 1% on all other purchases. “What’s in your wallet?” – asks the actor playing Montagu at the end of the spot.

Capital One has promoted, so far, its Venture Card, which allows users to earn unlimited double miles on every purchase, everywhere, not just airline purchases, in commercials starring Jennifer Garner, its Quicksilver Card, which allows users to earn unlimited 1.5% cashback on every purchase, everywhere, in commercials starring Samuel L Jackson, and various technology features, like Card Lock and Instant Purchase Notifications, in hilarious commercials that are a modern take on significant moments in history, one of them being the day Leonardo da Vinci painted the Mona Lisa and the other the Louisiana Purchase.