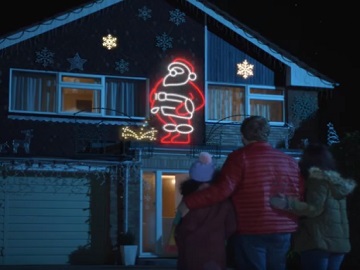 Capital One advertises its QuickCheck feature, which allows customers to find out if they’ll be accepted for a Capital One credit card before they apply, in a new advert, titled “Check it. Don’t Chance it”.

The 30-second spot features different scenarios in which people realize they should have made some checks before purchasing or doing something. Thus, a family looking at their Christmas lights installed on the house find out that they are an illustration of Santa peeing, which makes the father say he wishes he checked the lights, an old man trying to cut the turkey he burnt says he wishes he checked the temperature, and a woman who brought in a huge Christmas tree, that doesn’t fit in her living room, says she wishes she checked the height.

“It’s always better to check it before you chance it,” the voiceover says at the end of the spot, adding that at Capital One there is QuickCheck, which says whether or not you’ll be accepted for a credit card, before you apply, without affecting your credit score. The tagline “QuickCheck. Check it, don’t chance it” appears afterwards on screen, as it is said by the voiceover.