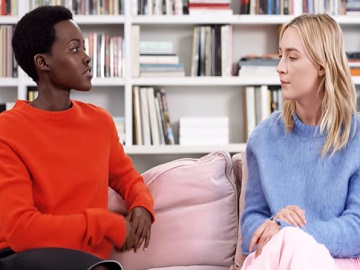 Calvin Klein has launched its Calvin Klein Women campaign, starring Lupita Nyong’o and Saoirse Ronan, to introduce its new fragrance, which celebrates the young icons of Hollywood and storied women of the past who are inspiring the next generation.

The label has released a short video featuring the two actresses as they talk about the sentence “I Am Women”. “The phrase ‘I Am Women’ is odd. Odd and beautiful because it acknowledges the individual, as well as the collective,” Lupita says, looking at Saoirse, who reveals she found it “really exciting” that she and Lupita were going to share this experience together with other women. “That’s how you come to an understanding of who you are as an individual by listening, by absorbing, by referring to other women,” Lupita also says.

The print campaign features the two award-winning actresses in a pair of striking portraits, positioned next to chosen figures from the past who have inspired them and shaped their identities as creatives and as women. Lupita is featured next to Eartha Kitt and Katharine Hepburn, and Saoirse is featured with Sissy Spacek and Nina Simone. They will also be featured in the CALVIN KLEIN WOMEN TV campaign, directed by Anne Collier in New York City, and set to debut worldwide later this summer.

The light pink-hued woody floral builds around three core ingredients, according to the brand, namely fresh eucalyptus acorns, delicate orange flower petals and rich Alaskan cedarwood. The flacon, in weighted glass and silver collar and pump, has a rounded shape and features a graphic, oversized disc-shaped cap designed in collaboration with Raf Simons, a canvas for a photographic print by Anne Collier.