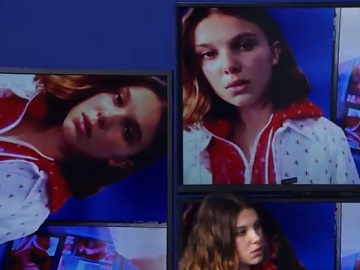 Millie Bobby Brown gets party-perfect in festive new styles from CALVIN KLEIN in a new commercial for the brand’s holiday 2018 campaign.

The Stranger Things star is rocking a variety of outfits that include white trousers paired with a gray hoodie, an animal print coat, a zip up dress, a logo sweatshirt, a sequin mini dress, a black mini skirt worn with black ankle boots and a yellow sweater, and more. The party spirit is also illustrated through Christmas lights, neon clocks and a cute dog that also makes an appearance by Millie’s side.

Millie Bobby Brown started her collaboration with the brand in January 2017, when she made her modelling debut in Calvin Klein’s By Appointment campaign. Born in Spain to British parents, the 14 year old actress and model earned worldwide fame for her role as Eleven in the Netflix science fiction horror series Stranger Things, for which she received a Primetime Emmy Award nomination for Outstanding Supporting Actress in a Drama Series at the age of 13.

She has also starred in the music video for Sigma and Birdy’s single “Find Me” and in commercials for Citigroup.