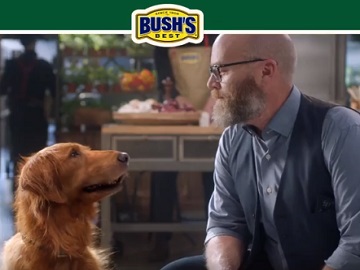 Bush’s Beans highlights how easy is to prepare its canned beans in a new commercial. Titled “Heat & Eat”, the 15-second spot features Jay Bush talking to his dog, Duke, about the Savory Beans.

This is not the first time Jay Bush and his furry friend co-star in a commercial for Bush’s Beans. In an older spot, they show people the secret kitchen where the brand’s variety of canned baked beans are made.

According to the brans, these beans are “naturally gluten-free and cholesterol-free” and “are picked at the peak of perfection”.