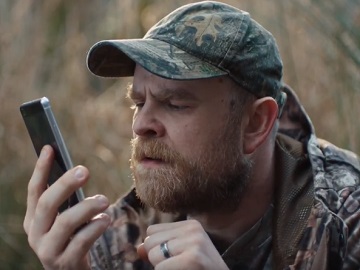 One of them, titled “Phone”, opens with a hand reaching into a babbling mountain stream to pull a six-pack of ice cold Busch Beer and with the Busch guy, a Busch can in hand, saying to the camera what stated above, namely “Some things should never change. Like the crisp, cold refreshment of Busch. But some things should”. He then mentions one of the things that should change, like John’s lack of awareness. At this point, John is seen asking a phone robot to get him to the main menu.

When the robot says it did not understand, he says “representative” in his attempt to speak to a representative, but the robot doesn’t get that either. John’s fellow, who has apparently lost his patience, asks him to give him the phone.

The end of the spot sees the Busch guy concluding there’s always a time and a place for Busch.

The Busch guy was first introduced as the neer’s new spokesman in the brand’s Super Bowl LI commercial (alongside with a new can), which was its first-ever Super Bowl commercial and paid homage “to the classic elements of Busch advertising while putting a fresh, comedic spin on it”, as described by Dan Kelleher, Chief Creative Officer of Deutsch NY, the agency behind the ad.