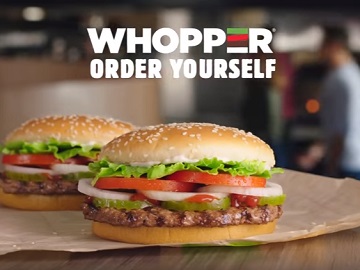 Burger King has released a series of new ads presented as “created by artificial intelligence”.

One of them features a robot-like voiceover talking as if he was reading a script. “Interior: Burger King, Whopper Land. We see frenzied whoppers. They are happy. They are two. They live forever,” the narrator says, while on screen two friends with Burger King crowns on their heads are seen eating Whoppers. Viewers are also given a glimpse into their conversation, when one of them says he wishes he was a Whopper and the other says he wishes he was a Whopper instead of a doctor. “We see the Burges King watches the friends,” the voiceover also says, adding that he is “creepy”. At the end of the spot, he is heard saying “We see the Whopper and the money numbers” and “Burger King logo appears”.

The other spots, part of a project called “Agency of Robots,” feature the chain’s new chicken fries, described as “the new potato”, the chicken sandwich, described as “bed of lettuce for you to sleep on” and “bed of mayonnaise for extra sleep,” the signature Whoppers, of which it is said to live “in a bun mansion just like you”.

The campaign, created by agency David Miami, will air during prime time on cable networks including MTV, History, TBS, Adult Swim and E!.