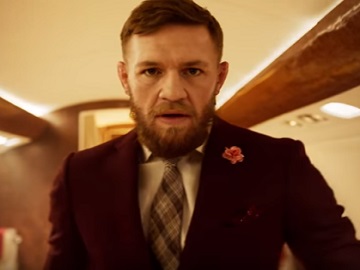 The 30-second spot opens with the current UFC lightweight champion on a private jet, donning a fancy suit and tie, delivering a special message for his haters and praising Burger King’s Spicy Crispy Chicken Sandwich, when the King hands it to him. “No doubt I’m going destroy this thing. So spicy and crispy and juicy. It just doesn’t stand a chance,” The Notorious says before having a bite off the sandwich. “From one king to another, this pack’s a real kick,” he tells the King and then takes a shot at his rivals, thanking them for “all the trash out” and mentioning they just put his Conor Jr. through college.

The commercial ends with the voiceover introducing the Spicy Crispy Chicken Sandwich, available only at Burger King.

In 2017, McGregor, labelled a “chicken” by Dagestan lightweight grappler Khabib Numagomedov, competed only once, losing a match to Floyd Mayweather. This year, in April, at UFC 223, he will lose the belt once Tony Ferguson and Khabib Nurmagomedov step in the cage.

In the past, McGregor has been the face of King crisps, the Pegasus World Cup and has starred in ad campaigns for Budweiser, Beats by Dre, and Betsafe.