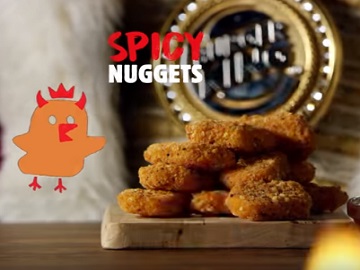 Burger King announces, through a series of new ads, that the Spicy Chicken Nuggets are back and invites people to get 10 Spicy Nuggets for $1.69.

“The Spicy Chicken Nuggets are back at Burger King. The King’s turning up the heat and bringing a spice for these spicy, spicy nuggets. Filled with juicy white meat and priced at 10 for $1.69, they’re spicy, juicy and packet with just the right amount of heat,” the voiceover says on the 30-second spot, which is also available in shorter versions.

The Spicy Nuggets, coming in two different options – Original and Spicy – will be found on the hamburger chain’s menu again, starting April 20.