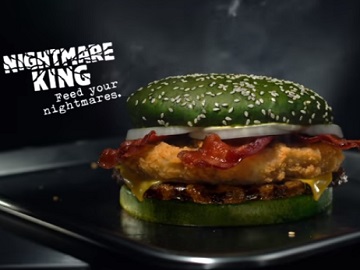 Burger King set out to feed your nightmares this Halloween with its limited-time burger called the Nightmare King. Based on the unique build of the sandwich, which consists of a mix of proteins like bacon, chicken and beef, plus cheese, the hypothesis was that this new burger could cause nightmares, so the fast-food restaurant chain turned to science to find out if a burger can actually give you nightmares.

Burger King has released a video featuring the phases of the unusual research study, which was done in partnership with the Paramount Trials and Florida Sleep and Neuro Diagnostic Services Inc., and Goldforest Inc. and consisted in having the participants eat a whole Nightmare King before going to sleep. Constantly monitored, throughout all the sleep stages, for 10 nights and asked the next day about what they dreamt, the scientists concluded that the Nightmare King increases your chances of having nightmares by 3.5 times.

The Nightmare King features a quarter-pound of savory flame-grilled beef, white meat crispy chicken fillet, melted American cheese, thick-cut bacon, creamy mayonnaise, and onions, all between a glazed green sesame seed bun, and will be available starting October 22. From October 22 to November 1, Postmates will offer it with free delivery to those who order it.