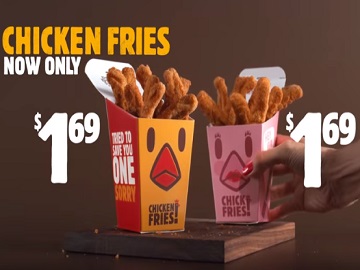 Burger King shines some light on gender inequality in its latest commercial, which is introducing “Chick Fries” – fries available in a pink box so they can charge women more for them.

The spot opens with the voiceover announcing the Chicken Fries for $1.69 and Chick Fries, which are “the same chicken fries you love, but way more, because girls like pink.” The burger restaurant chain has filmed the reactions of several female customers upon hearing the price of the Chick Fries – $3.09 (due to the new pink box they’re sold in), in an attempt to highlight that it is not fair to charge them more for a menu item that is cheaper for men.

The video shows the customers refusing to buy the fries with the “chick tax”, with one of them asking the cashier to take the fries out of the respective box. “But when you go into the drugstore and you pay two dollars more for your razor blades, can you say something then?” they are asked, which gives them food for thought. A line informing that “42% of the time women’s products cost more,” a phenomenon called “the pink tax”, appears on screen at the end of the spot, along with the message that, “at Burger King, we believe everything should be equal.” Finally, viewers are encouraged to support the pink tax repeal act by visiting the website callmycongress.com.